The Truth about Lilly by Christy McKee

Disgraced…                                                   Lilly Talbot never imagined she would be starting her life over again. Losing her good name for something she didn’t do has driven her to move into an old lake house she inherited in Vermont. Upon arrival, she is shocked. Half the roof is about to slide into Lake Champlain. Even more upsetting, the man who can fix it will only agree if she trades him room and board for his labor. What will the good people of Haley think of her sharing a house with the handsome bachelor?

A man with a past…                                      Connor “Mac” McQueen, once one of the infamous Whiz Kids of Wall Street, spent three years in prison for insider trading. Only one thing sustained him during his time inside, the thought of owning Point Cottage, a home he’d fallen in love with years ago. He plans to turn the house into a stunning showcase for his eco-friendly home construction business.

Sweet Jesus. Someone was in her house. Lilly froze, thinking if she didn’t move perhaps the intruder wouldn’t notice her. Each breath she took came in a short, painful pant, struggling to squeeze past the ice cold fear lodged in her throat. Beneath her pink knit hat, her scalp tingled with rising panic. She scanned the wall of French doors opening onto the wide screened back porch overlooking the glistening lake. The closest exit to the backyard was through the porch door, a good twenty feet away. Her cell phone was behind her, in her tote on the floor next to the recliner. Should she bolt for her car or make a dive for her phone to call the police? She jammed her hand into her right pocket…no keys. Almost like a battle of good versus evil, fear and logic warred inside her.

This house was her last stand and nobody had the right to be here but her. She closed her eyes and sucked in a deep breath, drawing on her dwindling store of courage. Pulse pounding, she silently chanted, “Oh God, oh God,” and forced herself to turn around to confront the intruder. A giant of a man, brandishing a baseball bat, stood in her kitchen, buck naked, squinting fiercely. Her gut reaction was to scream, so she did. “Get out of my house!”

She made a dash for her tote, frantically digging for her cell. “Stay right where you are, buster. I’m calling the police.” Her heart thudded so loudly she doubted she would be able to hear them when they answered her call.

With an irritated look that clearly indicated he didn’t consider the police a threat, the man tossed his bat onto the avocado green Formica island and picked up the red landline. His  cool blue eyes flashed. “Sheriff’s a friend of mine.”

He put the phone to his ear. “Morning, Lucas. It’s Mac. I’ve got a lady out here at Point Cottage who seems to be lost.” His gaze swept over her. “She needs a place to stay. Think they’ve got a spot open at the woman’s shelter?”

What? Did this intruder think she was homeless? She straightened and pushed her shoulders back in a show of righteous indignation, but when she tried to fold her arms across her chest, her bulky sweaters, two UGA sweatshirts, a trench coat and a full length faux mink coat, made it impossible.

“See you soon.” The man returned the phone to the center of the avocado green island. Lilly thought it looked like a pimento stuck in the center of a humongous green olive. To make sure this arrogant man wasn’t trying to play her, she grabbed the phone and punched redial.

“Haley police department. May I help you?”

Relief washed through her. “Sorry wrong number.” Lilly turned to confront the man in her kitchen. “Mac, is it? I’d be more comfortable if you waited outside, until your friend the sheriff arrives.”

One dark, arrogantly arched brow clearly indicated he wasn’t going anywhere. “You’re dressed for it more than I am.” He gave her the once over. “Why don’t you wait outside?”

Like she would leave this guy alone in her house. That’s not happening. Lilly stalked to the front door. As she stuffed her feet into her mud caked Nikes she’d left by the door last night, she glanced sideways at the man and realized he only looked naked. Standing behind the kitchen island, the lower part of his body had been obscured. Now she could see he wore snug fitting blue jeans, impudently unbuttoned at the top. Relief pulsed through her. Half clothed was just like a glass half full.

She noticed a man’s leather jacket on the hall tree, grabbed it and tossed it to him. “After you.” She waited for the hulk to precede her out the door.

He gave her a huff of disdain as he pulled on a pair of work boots and shrugged into the worn bomber jacket. Lilly followed close behind him onto the wide front porch.

She went down the steps and groaned when she saw her ancient station wagon resting in a sea of mud. Last night’s storm made it almost impossible to see anything. She’d missed the driveway altogether and also succeeded in mutilating a row of shrubs planted alongside the house.

Mac frowned at the damage and shook his head in disgust, which set her off. “Don’t know what you’re so bent out of shape about. They’re my damned bushes not yours.”

“Excuse me?” He glared down at her, a generous swath of his naked chest and powerful middle exposed beneath his unzipped jacket.

She opened her mouth to let him have it with both barrels only to be drowned out by the toot tooting of an insistent car horn. The blaring nuisance came from a candy apple red VW bug bouncing along the rutted circular drive in front of the house. Mac grinned as the car door opened, revealing an elderly elf wearing a blazing purple beret.

“Oh, isn’t this nice,” the blue haired lady chirped as she emerged from the red bug. “You two have met.”

Christy McKee began her career in TV news and eventually found her way into advertising and finally fiction. She believes a good story should be about characters who win your heart, sometimes move you to tears and occasionally make you laugh. As a reader, Christy hopes you’ll be swept into her characters’ lives enjoy getting to know them, experience the challenges they endure and be with them when they come out on the other side. 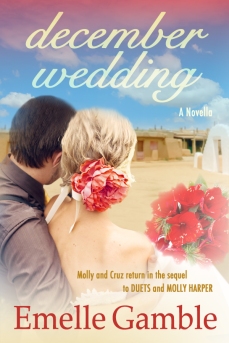 Molly Harper is a movie star whose fans think ‘has it all’. Cruz Morales is Molly’s true love, and he hates the media intrusions into their life.

Molly and Cruz are going to have a baby. And throw a secret wedding for her brother Harry.

What could go wrong?

Read DECEMBER WEDDING, the sequel to DUETS and MOLLY HARPER, and find out if there really is a happy ever after for Molly and Cruz.

Grab your copy today on Amazon.

Emelle is awarding a $20 Amazon GC, plus a digital copy of December Wedding to a randomly drawn commenter throughout the tour.  Click HERE For Rafflecopter.  To follow the tour, click HERE.

Always intrigued by the words ‘what if’,  Gamble’s books feature an ordinary woman confronted with an extraordinary situation.  Emelle celebrates the adventurous spirit of readers, and hopes each will enjoy the exciting and surprising journeys her characters take.

How to Beguile a Duke by Ally Broadfield

The spirited Catherine Malboeuf has just arrived in England to reclaim her ancestral home, Walsley Manor, and a valuable missing heirloom. Nicholas Adair, the attractive and frustratingly inflexible Duke of Boulstridge, however, is quite unwilling to sell the estate back to Catherine. Unless, of course, she accepts a small wager…

Nick will sell Walsley Manor if–and only if–Catherine secures an offer of marriage from an eligible member of the ton before the end of the London season.

Of course, Nick is certain he’ll win. After all, no proper gentleman would ever marry a woman who conceals a cutlass in her skirts. Yet something about Catherine’s unconventional disposition seems to ignite a need deep inside him. A need that won’t just cost him the wager, but the very heart he swore to never give away…

Ally will be giving a $20 gift card to Amazon or B&N to one lucky commenter throughout the tour. Click HERE for Rafflecopter.  To follow the tour, click HERE.

She crossed her arms. “Your Grace. I have never been so insulted. I am not accustomed to having my word questioned.”

“Well you must become accustomed to it if you are going to continue to break into other people’s homes at your whim.”

“You should as well if you are going to lie to your guests about your whereabouts.”

He took a step forward and looked down his nose at her. Every part of her body awakened to his proximity. A whiff of cedar tickled her nose.

“Miss Malboeuf, you would do well to learn the customs of English society. It is my prerogative to turn away callers I do not wish to see. When my butler told you I was not at home, you should have understood it meant I did not wish to give you audience.”

She took a step back, hoping her mind would reengage. “It is still an untruth, which is the same thing as a lie. Why not tell the truth? Then I would have known your intentions from the start.”

The duke clenched his jaw. “Perhaps you should seek out someone who can provide you lessons in deportment.”

“That won’t be necessary, Your Grace. I attended a class on deportment in New Orleans.”

His gaze dropped to her unshod feet. “It’s a pity you weren’t able to complete the course.”

Ally lives in Texas and is convinced her house is shrinking, possibly because she shares it with three kids, four dogs, a cat, a rabbit, and several reptiles. Oh, and her husband.  She likes to curse in Russian and spends most of her spare time letting dogs in and out of the house and shuttling kids around. She writes historical romance set in Regency England and Imperial Russia.

She loves to hear from readers and you can find Ally on her website, Facebook, and Twitter, though she makes no claims of using any of them properly.