Sword fighting, swearing, and riding astride come naturally to Saidh Buchanan. Simpering and holding her tongue-definitely not. Raised alongside seven boisterous brothers, Saidh has little interest in saddling herself with a husband…until she glimpses the new Laird MacDonnell bathing naked in the loch. Though she’s far from a proper lady, the brawny Highlander makes Saidh feel every inch a woman.

She has an angel’s looks, a warrior’s temper, and seeks out his kisses with wanton eagerness. Little wonder that Greer is intrigued by his comely guest. When reckless desire overtakes them, he’s more than willing to make an honest woman of her. But Saidh is the target of a hidden enemy, and Greer faces the battle of his life…to safeguard the woman he wants above all others.

Lynsay is giving away several random prizes: Grand Prize is a Print Set of All Three Highlander Romances and Winners Choice Scottish Stole.  Five (5) Runners Up will receive a Print Set of An English Bride in Scotland and To Marry a Scottish Laird.  (All US only). Follow Rafflecopter to enter.

“A lady does no’ climb trees.”

“Ye’ve told me that three times now, lad,” Saidh responded dryly, shifting her foot up to the next branch and hauling herself upward.

“Aye, but ye’re still doing it, so I thought mayhap ye had no’ heard me,” Alpin said sharply. When she didn’t respond to that, he added, “I could climb up there to pick the apples and throw them down, ye ken.”

“Then there would be no one to catch them,” Saidh pointed out.

“I was thinking mayhap ye could stay below and catch them, as a lady should,” he said, sounding much put upon.

Saidh plucked the apple she’d been climbing to and glanced down to see where the boy was before dropping it in his direction. Once Alpin had caught it, and set it with the others they’d already gathered, she started to climb down and asked, “Just how old are ye, Alpin?”

“Hmmm,” she muttered, easing down another branch. “Ye act ninety.”

“Then we are in agreement,” Saidh said cheerfully, easing down another branch.

“I suspect yer right,” Saidh said with a laugh and jumped to the ground. She took a moment to brush her hands together, then released her skirt from where she’d caught it up and stuck it through her belt for the climb, then beamed at the boy and said, “Is that no’ nice?”

Her eyebrows rose in surprise. “Why is that?”

“Because ye both just go about doing as ye wish with little regard fer how a laird or lady should behave,” he said firmly. “Someone needs to take the two o’ ye in hand and teach ye—What the devil are ye doing now?” he interrupted himself to ask with dismay when Saidh moved over to the apples, caught her skirt up and knelt to begin placing the apples in the bag-type affair she’d made of her skirt.

LYNSAY SANDS is the nationally bestselling author of the Argeneau/Rogue Hunter vampire series, as well as numerous historicals and anthologies. She’s been writing stories since grade school and considers herself incredibly lucky to be able to make a career out of it. Her hope is that readers can get away from their everyday stress through her stories, and if there’s occasional uncontrollable fits of laughter, that’s just a big bonus.

The Lady Meets Her Match by Gina Conkle

Rough-around-the-edges, Cyrus Ryland rose from humble origins to become England’s wealthiest citizen and most eligible bachelor. Called the King of Commerce, he thinks nothing of marriage until he hosts a masked ball and discovers an alluring woman hiding in his study. After one dance, the lady vanishes, leaving behind a single shoe. The hunt is on, but finding her is only half the battle.

Claire Mayhew wants her hard won independence…a mid-town shop of her own. She resists the scorching attraction with Mr. Ryland — her new landlord, but Cyrus isn’t a man who gives up easily.

Gina Conkle will be awarding a $25 Amazon or Barnes and Noble GC to a randomly drawn winner via Rafflecopter during the tour.

“Mr. Ryland, on your first visit to my shop, you questioned my accounts. Now do you plan to inspect how I manage the messengers?” She was being a little tetchy, but that assessment of his touched a sore spot. “As long as I pay my rent come Friday, whatever else happens is no concern of yours.”

He cracked a smile. “Not afraid to put me in my place, are you?”

“As in reminding you that you’re my landlord and you’ve no business giving me such commentary? I’m happy to. I doubt you share your opinions with the male proprietors who rent from you.”

Frayed nerves and a morning fraught with mishaps put her on edge. To admit this to him would be akin to acknowledging a chink in her shopkeeper’s armor. She wasn’t choosing her words with care but let them flow nonetheless.

“Duly noted, Miss Mayhew. I admit I haven’t changed my mind on this venture of yours,” he asserted.

“At the table, even you acknowledged the dangers preying on women in London. At least my sister’s business proposition must prove some goodwill during this trial period.”

She heard him, but her vision caught on the curious red ribbon. Ryland glanced at the box under his arm, his stance relaxing.

“This is the other reason for my visit today,” he said quietly, holding out the wooden box. “It’s for you.”

Her gaze snapped up to his. “For me?”

Claire reached out, accepting the gift with cautious hands. She hefted the box gingerly up and down, checking the sides.

He chuckled. “I promise there’s no viper inside.”

“You bought me a ledger, didn’t you?” Her tone lacked all enthusiasm. A rectangular account book could fit inside the box. So would a shoe.

“If I did, you must agree a ledger would do you good.” His brows slammed together, a small vertical line forming above his nose. “But you won’t know until you open it.”

Gina writes Viking and Georgian romance with a softly sensual side. She loves history, books and romance…the perfect recipe for historical romance writer. Her passion for castles and old places —the older and moldier the better— means interesting family vacations. Good thing her husband and two sons share similar passions. When not visiting fascinating places she can be found delving into the latest adventures in cooking, gardening, and chauffeuring her sons.

FOUR great deals to kick off your weekend!

#1  Summer of Love by Debra Elizabeth

June 25 was supposed to be the best day of Jessica Blackstone’s life, but a family accident sends her perfect life into a tailspin. Trying to cope with the tragedy, she retreats to the family beach cottage for some much needed solace.

John Smith has been burnt by love, and is not interested in another relationship, that is, until he meets the beautiful and fragile Jessica. Can these two lost souls find love and heal their fractured hearts?

When Kenneth Mackay, long-banished rogue and thief, returns to the Mackay holding at the request of his brother, he has no idea what he might find. He certainly doesn’t expect to be confronted with his twin’s imminent death, or with the plan his brother has concocted.

Ten years before, Malcolm made a tragic mistake, and, to preserve the family name—and his own skin—he allowed Kenneth to take the fall. Now that he is dying without an heir, Malcolm plans to atone for his mistake: by giving Kenneth his life back. All Kenneth has to do is assume his brother’s identity. But complicating matters is the unexpected return of Lady Isobel Mackay, the daughter of an English marquess and the wife Malcolm didn’t want.

Isobel barely knows the husband who abandoned her even before their marriage, and she’d long since given up on having a real marriage with him. Yet when she returns to the Mackay holding far earlier than expected, she finds her husband a changed man. Despite the hurt between them, Isobel’s heart responds to this man who cares for his entire clan as if they were family. Who, for the first time, cares for her as if she is, too.

Falling in love with her husband had never been part of Isobel’s plan. But when their future is suddenly in peril, Isobel must find a way to save him—from himself and from the deception threatening to tear them apart.

Get it now for just $.99 at Amazon     Checkout all of her books at Author Central.

#3  Lattices of Love by Eris Field 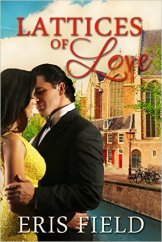 Emine Wheeler, a 26-year-old Turkish-American professor of psychiatric nursing, has vowed to marry for love, like her American father. When she meets Marc van Etten, a reticent Dutch psychiatrist, at a conference in Amsterdam, she recognizes him as the man she has been waiting for and knows that she can’t live behind the lattices of old harem rules any longer.

Marc, who believes that his colleagues blame him for his wife’s suicide, restricts his life to work and caring for the troubled four-year-old girl he calls his daughter. But, when Emine runs into difficulties, he offers his assistance. Emine, ignoring the age-old harem rule that forbids talking or spending time with a man who is not a family member, accepts his help.

Later, when Emine must choose between accepting the family-approved proposal of a man she does not love or damaging her family’s honor, Marc offers a solution—marriage. It will save her family’s honor and provide a mother for his daughter.

Believing that her fierce love for Marc will be enough, Emine agrees, only to discover that it is not. When Marc erroneously accuses her of betraying him, she flees.  Realizing belatedly that he loves Emine beyond everything in his life, Marc must find a way to win her back.

#4  Across the Tigris by John Roane

The Second Gulf War is in its occupation phase. Military Policeman Devlin Delaney is going home. On his last day of duty, he stumbles upon treason, adultery, and the murder of a young Iraqi woman by crucifixion. His investigation puts his life at risk and exposes a conspiracy that could tear the Army apart. Falling in love with the beautiful victim’s ghost is not part of the plan.

*Special deals are subject to change without notice. Please refer to retailer sites for official pricing and length of offering.